The biomass hydrothermal method created by Huake Chuangzhi is another branch of wet chemical method, which has many advantages such as more environmental protection, lower cost and excellent finished product performance, or will become a new trend of nano silver wire preparation methods.

First of all, one of the raw materials of this method, biomass is a variety of organisms in nature, with a wide range of sources, low cost, no pollution and easy degradation. In terms of raw material sources, it has the advantages of environmental protection and cost saving.

Secondly, unlike traditional methods that require the addition of various reagents, biomass itself can release small molecules with reducing properties in the hydrothermal process, as well as some control agents, surfactants and other substances, so there is no need to add additional reagents during the preparation process. The whole preparation process is also very green and environmentally friendly. Moreover, biomass in the reactor, due to hydrothermal action and carbonization, the whole process can achieve "CO2-negative" (carbon negative emission) [1, 2], from the characteristics of high energy consumption and high pollution in the chemical field, which undoubtedly played an important role in promoting carbon neutrality actively advocated by the state in recent years.

Thirdly, since no additional reagents need to be added during the preparation process, the nano-silver wires synthesized by biomass hydrothermal method are easier to clean and purify, which can effectively avoid the problems of yield reduction and quality degradation caused by traditional separation methods.

Thanks to the characteristics of high crystallinity and slow and stable growth of hydrothermal method, Huake Chuangzhi's original biomass hydrothermal method synthesizes nano-silver wire, and its length-to-diameter ratio can reach about 2000, breaking the current industry level of 1000. In addition, compared with the traditional polyol method prepared silver nanowires, the wire diameter distribution is narrower and more uniform (see figure below), which is more conducive to coating production. In view of these advantages, Huake Chuangzhi's nano-silver wire will obtain better conductivity and light transmission, and future touch screens will have a faster and smoother touch experience and a higher definition display effect. 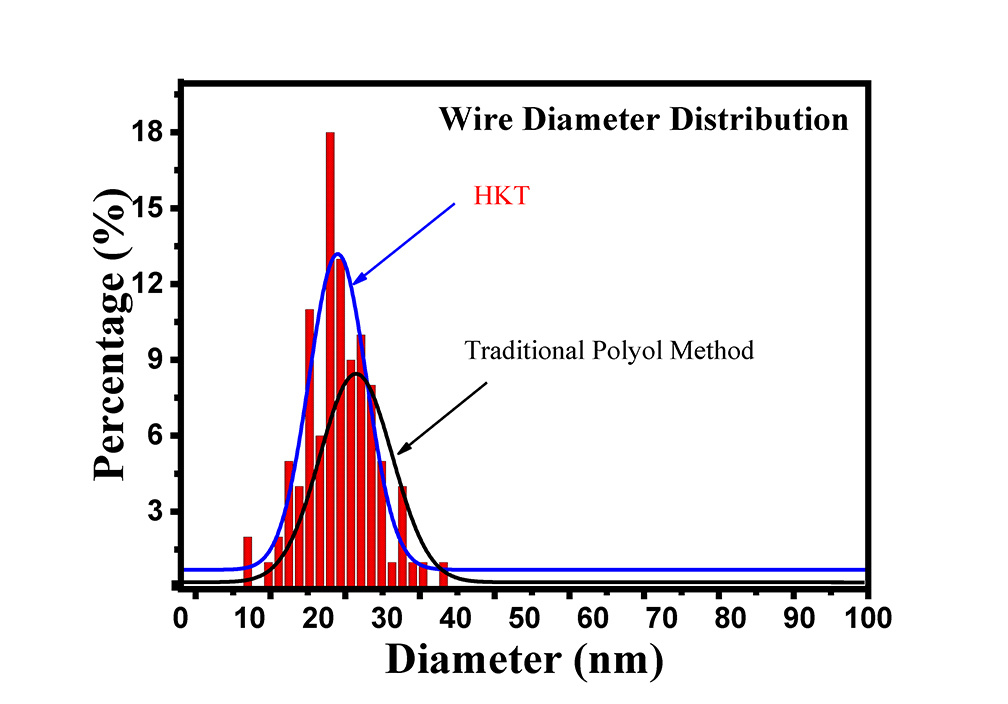 This time, he led the team to once again develop a biomass hydrothermal method for synthesizing nano-silver wire, creating another track for nano-silver preparation, and achieving another breakthrough in the research and development of nano-silver materials!

[1] FUNKE A, ZIEGLER F. Hydrothermal carbonization of biomass: A summary and discussion of chemical mechanisms for process engineering [J]. Biofuels, Bioproducts and Biorefining, 2010, 4(2): 160-177.