The cost of Huake Chuangzhi conductive film is less than 50 yuan, and the era of nano silver wire is fully coming!

The cost of Huake Chuangzhi nano silver wire film has dropped to 50 yuan per flat, and the ITO film that occupies the main stage of transparent conductive film is no longer the protagonist.

In 2007, Jobs' creativity and persistence of "using touch screen instead of buttons" made touch technology begin to play an important role in human-computer interaction, for more than ten years, as the main body of transparent conductive material ITO film production scale rapid growth, caused indium resources scarcity and other aspects of many problems, with the touch panel large size, low price demand, and ITO film is not suitable for flexible display applications, conductivity and light transmittance and other essential factors are not easy to overcome and other problems, etc. The market for replacing ITO transparent conductive film will also gradually rise, and the voice of domestic substitution is getting higher and higher, and the transparent conductive film market is setting off a big change. 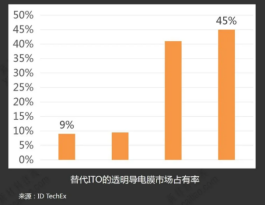 Under the changing situation, the ITO film that occupies the main stage is no longer the protagonist, and Chinese technology entrepreneurs are vying for the right to speak.

With the rapid maturity of the new generation of touch material nano silver wire technology and the continuous improvement of product and technology iteration, high-tech enterprises represented by Huake Chuangzhi have accelerated the import substitution penetration of domestic high-end transparent transparent conductive films, and the substitution trend has been popularized from large size to medium size and flexibility.

In 2018, Huake Chuangzhi Jiangsu Manufacturing Base was inaugurated in Suqian, Jiangsu, opening the prelude to the large-scale production of nano silver wire films, and today, the pace of domestic high-end transparent conductive films entering the market has accelerated, the cost performance has continued to improve, and the localization advantages have become more and more prominent. Recently, Zeng Xiping, chief technology officer of our company, said that the exclusive roll-to-roll integrated coating production line of Huake Chuangzhi can reduce the cost of nano silver wire film to 50 yuan / flat.

"In 2017, we planned to build large-scale coating wiring and predicted that the cost of nano silver film could be greatly reduced, and the cost of Huake nano silver wire film has reached about 50 yuan a flat." Zeng Xiping said that Huake Chuangzhi has realized the automatic synthesis of nano silver wire ink, and through supply chain optimization and other measures, it will further reduce costs and increase efficiency.

The results of "Standing Up to the Sky" must be based on solving the difficulties of "standing on the ground".

Mastering the core preparation technology of nano silver wire is only a ticket to enter the independent production of transparent conductive film, and how to overcome the problems faced by new materials after expanding production, achieve scale effects under the premise of reducing costs and increasing efficiency, and accelerate import substitution is an extremely difficult hurdle for us to face.

Whether from the perspective of process flow, equipment value (equipment investment of hundreds of millions), or nonlinear control, coating is a key process in the preparation of transparent conductive film, its uniformity, consistency, alignment, baking stability, binder diffusion, areal density stability, etc. are closely related here, it can be said that the quality of coating is directly related to the quality of film material, and the level of coating performance is directly related to cost, qualification rate and other practical indicators.

Therefore, in the planning of Jiangsu manufacturing base, Huake Chuangzhi invested hundreds of millions of yuan in the coating production line alone, and jointly customized high-precision slit large-scale coating equipment that meets the nanoscale coating with German equipment manufacturers.

"It turns out that after coating one layer, it is necessary to rewind and then rewind, but we can continuously paint continuously and realize dust removal, coating, suspension drying, online resistance detection, UV curing and other processes on one production line." Zeng Xiping said that in the early stage, limited by the lack of special nano silver wire coating equipment, our company adopts the method of outsourcing to carry out multiple step-by-step coatings, which not only limits production efficiency, but also yields and quality control are problems. After the self-built production line was put on the agenda, the R&D team and equipment manufacturers jointly overcame the problems in design, production line adjustment, and trial operation of the whole line, and built a roll-to-roll integrated coating production line and officially put it into operation, realizing the independent production of nano-silver wire film and increasing production capacity.

How to develop strict quality control measures for each production process on the coating production line, quickly identify abnormalities in the pre-process stage, make corresponding improvement measures in time, and ensure that defective products do not flow into the market, our team focuses on the layout of testing and curing links to improve the overall scientific and intelligent level of the production line:

The traditional resistance uniformity detection method of conductive film is carried out by manual handheld detector, which is not only inefficient, consumes labor resources, but also often has a large possibility of missing detection.

Our coating wiring has added an online continuous product monitoring system, through non-contact monitoring of different positions of the membrane, mechanized and quickly identify the abnormal resistance area, more scientifically and comprehensively avoid the flow of bad film into the next process, and reduce the possible environmental impact of the transportation and slitting of the membrane caused by manual detection, and fully guarantee the quality of nano silver wire film.

It is said that the nano silver wire needs to cover the "quilt", and the quality treatment of the quilt is mainly guaranteed by the UV curing module in addition to its own formula. In the preparation of nano silver wire ink, our company covers the silver wire in layers to effectively prevent the intrusion of water vapor.

In the coating stage, the world's most advanced UV curing module with the highest energy density is configured, and a relatively confined space is established by nitrogen protection UV curing technology, which is filled with inert gas, which greatly reduces the influence of oxygen and water vapor in the air on the reaction of nano silver wire film, and effectively prevents the failure caused by "silver migration".

The TP modules made of our nano silver wire film have passed the weather resistance double 85 test, and the performance change in 1000 hours is within 10%, which can meet the actual use for more than 10 years.

The future competition is to fight who can make the product stronger strength. With higher cost performance, Huake Chuangzhi has successfully applied nano silver wire from the ITO film to the large-size touch screen market such as smart blackboards, conference boards and touch TVs, penetrating into medium-sized fields such as educational tablets and advertising machines, with the acceleration of the domestic substitution process of high-end transparent conductive film and the flexible innovation brought by nano silver wire technology, it is bound to set off a wave of popularity of nano silver wire film in small size fields such as car screens, folding screens, and mobile phones.

In the view of Yu Dongxu, the founder of our company, the low-cost mass production of nano silver wire conductive film is only the beginning, intensifying the reshuffle of the industry, and it is more worth looking forward to in the "era of nano silver wire" that has fully exploded in large, medium and small sizes!